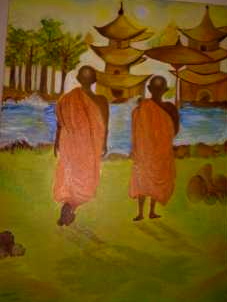 Two monks near a river.

Once upon a time there were two monks, one younger and one older who were heading to a new monastery to meditate. In order to reach this far off monastery which lay on top of an  mountain, they had  to cross a jungle in the valley below. As they trekked through the dense forests, they encountered a young beautiful lady who wished to cross a river. She could not cross it by herself, for the current of the river was too powerful.

The two monks  glanced at each other as they had taken oaths never to touch a woman. Without uttering a word, the older monk gestured to help her . She gladly obliged and he gently placed her on his shoulders and carried her across the rough stream. The younger monk was clearly upset with the older one’s actions but said nothing at the time.
Once they crossed the river, the  lady got off the monk’s shoulders and then thanked him with a broad smile as she went on her own way.

The younger monk had a look of disgust on his face because they had vowed such celibacy where even eye contact with a woman wasn’t allowed but he still said nothing.
As they finally reached the entrance of the monastery, the young monk grew very restless and with an outburst of anger he berated the older monk for breaking the rules and asked him why he helped the lady.

There is no use in holding on to the burdens of yesterday that cause us to be upset. Let it go and set yourself free!