“Symbolism exists to adorn and enrich, not to create an artificial sense of profundity.”- Stephen King 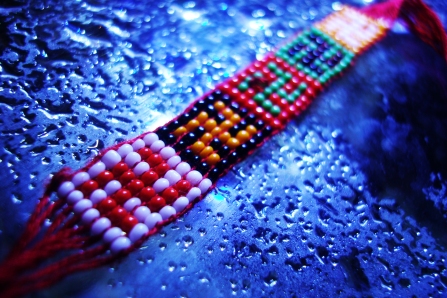 Humans have used symbols and symbolism to convey messages and reveal deeper meaningful ideologies to each other since time immemorial. A picture is worth a thousand words after all.

Over time though, facts and historical accounts become Legends. Legends become Myths and Folktales. Before you know it, events that where once accountable and undeniable turn into fictional forms and fallacies of their original state.

It was 5 years ago on this day that I first embarked on my travels to the Indian subcontinent. It was a rather chilly, yet sticky and humid afternoon during the peak of the Monsoon rains.

While I didn’t have an umbrella on me, I did have some really amazing friends in the South-Indian city of ‘Mangalore’ and they let me stay with them.

Their house was on a hill top, literally on par with the clouds. If you just took a peek outside the window or sat out on the porch, you could see the rain bearing abode approach ever so slowly right before your very eyes.

Quite a spectacular view to which words could never do justice.

We went travelling out and about and there, amidst the hustle and bustle of the city;  I first noticed a particular symbol that caught my eye.

It was painted outside the doors of houses, used as stickers on auto-rickshaws and I remember there was even a matchbox that had it as it’s company logo. That symbol was the Swastika !

At first, I was baffled and flabbergasted! Prior to my departure to Managalore, I had just watched the movie ‘American History X’ starring Edward Norton.

For those of you who don’t know or haven’t watched the film, it’s the story of a Neo-Nazi guy that goes to prison for killing minorities but later lets go of his hatred and has a change of heart.

All the while I had developed this preconceived notion that Swastikas = Nazis and everything about Swastikas was horribly racist. To be wise you must first be foolish and stupid.

It would take me months of research and hours in the library reading ‘Mein Kampf’ along with history books on Hindu mythology to realize what a fool I was.

Ironically, the Swastika actually denotes well being, good luck, protection and eternity. To this day it is widely used in Hinduism, Buddhism, Jainism and Taoism.

Although it’s true origin is up for debate, one cannot deny the fact that it was used all over the ancient world as a symbol of life, peace and prosperity before the world began associating it with death, scientific racist ideologies and Nazism.

For instance in countries like China, Japan and Korea it was a homonym for the number 10,000 (thought to denote the whole of creation) as well as a symbol of the Sun itself.

And it wasn’t just exclusive to the East either. It was used by the many Indo-European cultures like the Greeks, Romans, Celts, the Slavs  and even by the Russians and Indo-Iranians.

In Africa, it was an ancient symbol in Kemet (Egypt), Ethiopia and by the Ashanti peoples.

In the Americas it was used by Native American tribes like the Navajo, the Hopi and the Sioux and even many Meso-American cultures like the Mayans and the Incas.

Indigenous peoples of  Panama and Columbia called the ‘Kuna‘ also used it since ancient times and the symbol is prevalent on their modern day representative flag too!

One group of people who did not use the Swastika were the Nazis. That’s right, Hitler did not adopt the Swastika to symbolize the Nazi party.
The symbol that Hitler used in the 1920’s was called a ‘Hakenkreuz’ (Hooked cross) .

Although this symbol was structurally and geometrically derived from the Swastika and looks like one; it’s meaning and message couldn’t be more different and far apart.

Just as a ‘Goose’ looks similar to a ‘Swan‘, they are still two completely different species.

The Swastika is generally right facing (卐) but can be left facing too . This variant is called a Sauwastika (卍) and has a greater prevalence in Buddhism than Hinduism.

This symbol was revered and respected by the world for thousands of years. In my personal opinion, we should continue to do same and not let a few idiots who bastardized it’s interpretation for their own selfish purposes shun it’s true identity and essence.

Just like a Swastika, I wish you all Love, Light, Life and Good fortune.
Namaste!